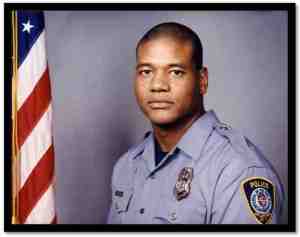 As part of a new section on Ross-Elder.com, I will be exposing the idiocy of modern conspiracy theory proponents such as Alex Jones, Jesse Ventura, the 9/11 Truther movement, and the plethora of so-called “patriot” websites.  Since this particular case has been hitting my social media feeds for the last few days, I thought I would start with it.

This theory seems to be based on an unsourced rant that claims Yeakey, one of the first officers on the scene of the Oklahoma City Bombing, somehow discovered the “truth” about the bombing and was then murdered by the Federal Government in order to silence him.

This conspiracy has been linked at various sites around the net including infowars.com, prison planet, and riflewarrior.com.  Many of these sites claim no autopsy was performed, no gun was ever found, and that Yeakey was shot in the back of the head.  Oddly, some who make such claims also include scans of the autopsy report; a report that clearly shows the gunshot to the temple and describes a hard contact entry wound consistent with a self inflicted gunshot wound to the head.

The theory also maintains that Yearkey’s wife is on the run, hiding from these same evil conspirators.  Yearkey’s wife was hiding alright, hiding from Yearkey.  In fact, she had a protection order against him and a court order preventing him from seeing his kids.  Obviously, there is a lot more to that part of the story than the theorists want you to know.

Other assertions by these theorists is that an ANFO bomb could not have caused that much damage to the Murrah building and therefore it must have been a wider conspiracy involving several explosive devices.  Assertions like this are also made about the World Trade Center buildings.  Of course, these assertions are always made by people who have no understanding of explosives and their effects.  A less sophisticated, but similarly constructed VBIED was used in the attack on FOB Salerno in Afghanistan.  To see the effects of a vehicle bomb of this size, follow the link below.

It is always hardest to believe the truth.  Yeakey was a hero and he, along with 80 of his fellow officers, was to receive a commendation for his actions on the scene.  But he was also a very troubled man.  His personal life was a mess and he just spent a day dragging bodies from rubble, many of which were children.  No one can experience that and not be affected in some way.

Part of the conspiracy theory states that Yeakey was prevented from going back to the site after he discovered something suspicious.  He was removed from the site, but only after he fell through a collapsing floor and was injured.

The New York Times covered this situation quite thoroughly in their own article regarding Yearkey’s suicide.  The NYT actually spoke to people who worked with the man, something these conspiracy theorists never accomplished.  You can read the NY Times story at the link below.

This case is tragic in every sense.  But, the only conspiracy present is the shameful and pathetic conspiracy concocted among the theorists who seek to profit by sullying the memory of a troubled hero.  For that, they should never be forgiven.

10 thoughts on “Terrance Yeakey – the hero being used by idiots”