As you all know by now, occasionally, a friend, colleague, or social media acquaintance slips me a note and asks me to look into a specific conspiracy that has been dificult to prove or disprove.  Well, this week, that little note was a whopper.  Although I have gone out of my way to debunk as many of Alex Jones’ theories as possible, I have never considered looking into the man himself.  That very thing was requested of me. 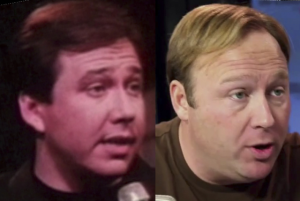 One of the many photo comparisons found on the internet supporting a conspiracy theory.  Oddly, this photo actually helps DISPROVE the theory.

That is the conspiracy theory anyway.  If you search those words in any web browser you will find a plethora of articles, photos, opinions, and videos from both sides of the argument.  Some believe that Alex Jones is, in fact, comedian Bill Hicks, who was probably best known for being banned from the David Letterman show over his last appearance on that late night program.  Hicks appeared some 12 times on Letterman but his final set was cut completely from the show because Letterman and the producers found it to be too controversial.  Years later, Letterman, with Hicks’ mother as a guest, played the deleted set for all the world to see.  It seemed that just a few years needed to pass before network television would display something of that nature in its programming.  My, how times have changed.  I think if Hicks did that set today, naked, blowing up balloons with his ass, it would still make it onto the screen.

To continue with the conspiracy theory, as the story goes, Hicks faked his death and went underground for about 2 years, re-emerging as Alex Jones, commentator, activist, and conspiracy nutjob.  The story that Hicks suffered from pancreatic cancer, was treated quietly, and eventually succumbed to the disease in 1993, was all a grand charade, perpetrated by a gifted comedian and social commentator. 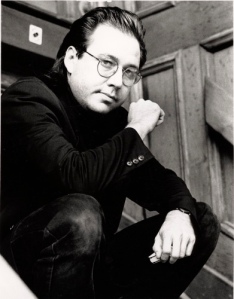 Adding more fuel to the conspiracy fire was the fact that Hicks’ long time friend and producer, Kevin Booth, arrived at Jones’ side when Alex began making headway in his own career.  Surrounded by Hicks’ friends and coworkers, and bearing a remarkable resemblance to Hicks, Alex Jones began creating a media empire from the very same social commentary for which Hicks was well known.

Many of the theorists even claimed that you can’t find a photograph of Alex Jones before 1994.  Not one.  And there is no record of him attending the schools he claims to have attended in his younger days.  Obviously, Jones did not exist before Hicks died.

The conspiracy is too beautiful to ignore.  The elements are perfect and the idea that Hicks could have pulled such an obvious, and brazen joke on the people of the world was such a fantastic idea that people want to believe it.  I wanted to believe it!  Hell, I determined when I set out on this quest that if I did figure out that Jones really was Hicks, I would keep that information to myself and just sit back and laugh as Bill made a mockery of everything we hold dear.

I WAS WILLING TO KEEP ALEX JONES’ SECRET

I began looking into this conspiracy theory a few days ago.  Then I enlisted the help of my friend, Ed Gawrelak, a private investigator in Michigan.  Ed and I started really digging into the story piece by piece.  We performed photo comparisons, voice analysis, studied the mannerisms of the two men, compared biographies, and performed records searches.

There are several things that do in fact support the theory.  Superficially, the two men do look very similar.  Their faces and frequently used expressions have many similarities.  Their mannerisms are also very similar.  There are many photos on the internet supporting those facts but, during real analysis, I determined that some of those photos have been altered to better support the conspiracy theory.  I have another theory about this but I will cover that at the end.

The first success in this investigation was the discovery of yearbook photos of both men.  Both men attended the high schools they claimed to attend in their biographies and both can clearly be seen in the accompanying yearbook photos.  Since Jones’ photo is pre-1994, the assertion that no photos of Jones exist prior to 1994 was thoroughly debunked.

The Class of 1993 group photo with who I suspect is Alex Jones circled. Jones is listed among the names at the bottom of the photograph but the students are not listed by location just alphabetically.

As you can see from the photos, as teenagers, there is no resemblance between Hicks and Jones.  I will not reveal the exact methods Ed and I utilized to make our photo comparisons because those are tools of the investigative trade that you will all have to learn on your own.  Ed and I made our bones in this field so you guys will just have to do the same and figure it out.  But, there are certain things about your appearance you cannot change.  Those things are used by intelligence and investigative professionals to identify people all over the world, even when you can’t see their face. Additionally, Hicks was 6’1″ tall. Jones is 5’10” at best and that may be exaggerating a bit. This height was verified by photo comparisons as well, with Jones standing next to other well known people for whom a definitive height is documented.

Ed’s investigation was in-depth enough that he obtained information and documented histories that cannot be faked.  This information will also not be shared for the privacy of the subjects.  Just because I dislike Jones and refute most things he says, he deserves his privacy just as much as you and I.  I can only say that the information is irrefutable.

The grave marker where Bill Hicks is buried in Mississippi.

Hicks is dead.  Yes, his quiet struggle with his illness, his seemingly sudden passing, and the lack of publicity at his funeral help feed the conspiracy theory, but, according to official records, Bill Hicks died of pancreatic cancer at the far too early age of 32.  And, if other rumors surrounding this seemingly brilliant comedian are also true, Denis Leary had to start stealing jokes from someone else.  Oddly enough, comedian (as if he was ever funny) and talk show host Bill Maher likely stole his most controversial line ever from Bill Hicks.  Soon after 9/11, Maher said, “We have been the cowards, lobbing cruise missiles from 2,000 miles away. That’s cowardly.  Staying in the airplane when it hits the building, say what you want about it, it’s not cowardly.”

During one stand up set, Bill Hicks once said, soon after the Gulf War of 1991, “I love the way we talk about “cowardly suicide bombers” these guys drive cars filled with bombs because that’s the only way they can fight back against the “New World Order”, meanwhile we launch cruise missiles from floating iron islands 200 miles away. Who are the cowards again?”

Alex Jones is NOT Bill Hicks.  Jones is apparently a Hicks admirer, and Kevin Booth joined forces with Jones to help him begin producing professional content.  People say Jones has had facial surgery to alter his appearance but, if he did, he may have done so in order to look MORE like Hicks, not less.   The mannerisms and language are probably the product of coaching, by the same producers and handlers who worked with Hicks.  That explains the similarities.  Booth’s interests in conspiracies and social commentary would naturally draw him to public faces that shared his vision of the world.  The ideologies of Hicks and Jones are very similar so it would only be natural for Booth to be involved in Jones’ future once he was so unfortunately unemployed.

So, I have spent a lot of time disagreeing with and proving Jones wrong.  Today, and you should mark this down for the sake of history, I will proclaim that Alex Jones was right.  He is not Bill Hicks.  Jones once said he WAS Bill Hicks during one of his broadcasts but it is obvious from watching the entire segment that he said so in jest.  He later corrected his statement for his listeners.

RIP Bill Hicks.  And, Alex, don’t think I’ve gone soft.  I will be back to do battle in the arena of investigative procedure over more of your crazy theories later.

For added enjoyment (and further confirmation that Jones is NOT Hicks) here are some family photos of Jones as a young man. 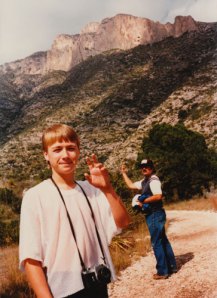 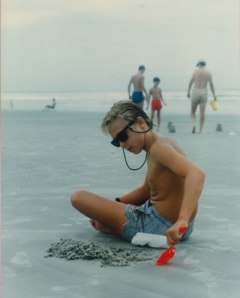 57 thoughts on “The Debunk of All Debunks – Who IS Alex Jones? (ongoing updates)”