Sometime following the attack on the U.S. Foreign Service facility in Benghazi, Libya on September 11, 2012, a website calling itself Uncle Sam’s Misguided Children, an old nickname for the U.S. Marine Corps, created a image meme directed at Hillary Clinton.  The idea behind the meme is that Clinton was somehow responsible for the Benghazi attack and her State Department abandoned our personnel there, leading to their deaths.  The meme includes a graphic photo purported to be Ambassador Chris Stevens in the process of being tortured and killed by his captors.  The photo appears below. 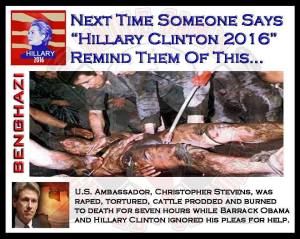 Although there are no attributions to the photo at the center of the poster, thousands of people have shared this image across social media.  If you search for the words, “Hillary what difference does it make”, search engines return thousands of hits on photos and over 2 million web pages.  The photo within the above meme is frequently attached to those words.

I have seen this Benghazi meme on so many social media pages that I decided to inform people of its questionable provenance.  I thought that would be helpful and that people would appreciate being told the truth.  Boy, was I ever wrong.  The negative reaction to the truth made me a little pissy, so I started being less nice about it.  Here is a screen shot of my gentle prodding.  Notice the replies to my comment.

When I would attempt to explain the photo, I would be attacked and insulted.  So, instead of walking away and just letting people bathe in their ignorance, I thought I would do this simple article.  While compiling this article, I wished one of my categories for my website was, “Friggin Idiots.”  Perhaps I will add that later.  In essence, if you are sharing these memes and photos without any idea of their origins or legitimacy, you are a friggin idiot and should have your internet connection cut for a minimum of 48 years.

CLICK THIS PHOTO TO FIND ROSS ELDER BOOKS ON AMAZON

But, Ross, PROVE it isn’t Stevens!  Go ahead!  Cuz you CAN’T and you’re a shill for the New World Order!

Okay, fine.  I will do that in a moment.  But, first, I will tell you that I followed my normal procedure for debunking this particular social media plague.  That process is explained in my upcoming book, available on Amazon December 30th, 2014, titled, Just Stop – A brief guide to rational thought for the modern conspiracy theorist.  This particular meme fit into the category of, “It fits the narrative just too well.”  So, here we go.

The official reports, as well as many photographs and even a video posted by CNN, show ambassador Stevens fully clothed, uninjured, other than soot from the fire, being pulled from the rubble of the building and carried off – presumably to the hospital in which he was later found.  The people surrounding Stevens at the time were not being violent toward him.  They were helping him.  So, the assertion Stevens was raped, brutalized, beaten, burned, and tortured prior to his death seems to have no credibility.  Since the government has not released the official autopsy reports as of yet, at least not that I can find, we can’t say for sure, but the witness statements and other evidence do not support the torture/rape/beating narrative.

The photos above are known to be of Ambassador Stevens at the time he was pulled from the Benghazi facility and transported to a local hospital.  But, I suppose that doesn’t really prove anything, does it?  He could have been tortured, raped, beaten, and murdered after these photos were taken.  So, you got me.  That isn’t proof.

Are Chris Stevens and his Benghazi Killers time travelers?

Yeah, that’s what I asked.  Weird, huh?  Here is the bottom line – read it, remember it, and spread it around generously.  Tell all those friggin idiots on social media that they are exactly that – friggin idiots – and get them to stop spreading the lie.

By the way, I am not a Hillary supporter.  I have never liked that woman, if that’s what she is.  I was alive during the Clinton years and I have never had an ounce of respect for her or her husband.  They disgust me.  A draft dodging rapist and a die-hard Marxist radical – the perfect couple.  How she emerged as an important political figure when her only previous experience was as a crooked lawyer who married a Governor is beyond me.  She is the epitome of fraud and corruption.  How the hell did she become a Senator from New York?  But, that is for another day.  The Democrat party shafted her and stole the nomination from her during her Presidential campaign and gave it to Obama instead.  I kinda have mixed feelings about how that played out.  We, the people, got screwed either way.  But, I digress.  On with the news.

Now that you have reviewed the above links, which I assume to have since you can’t really follow along from here without doing so, do I even need to write more on this subject?

All of those links posted above are on the subject of torture, generally in Latin America, but also in Bagram, Afghanistan.  They also prove that the photo has been floating around the internet since at least 2009.  Chris Stevens did not travel back in time in order to be tortured so that idiots on the internet could make an anti-Hillary meme.  Not even the best conspiracy theorists could wrap their heads around that one.

The photo appears to be evidence in an investigation into official government sanctioned torture used against persons in Latin America, mostly Honduras, Uruguay, Brazil, and Bolivia.  The photo, only one of several of the same incident, probably predates 2009 by several years and may date back to the late 80s.  Most of the articles associated with the photo are centered around Uruguay and a CIA agent named Dan Mitrione, who taught Latin American police forces how to use torture, including the types shown in the fake Stevens photo, to extract confessions.  Mitrione is rumored to have kidnapped homeless people to use as guinea pigs for his police training sessions and then later killing them and dumping their bodies.  I don’t have any way of verifying if that information is true.  I just thought you might like the conspiratorial aspect of the history.  Mitrione was kidnapped and killed in Uruguay in 1970.  Sounds like he got what he deserved.

Get brutally honest and assertive with these internet idiots who create and share these fake stories.  They are despicable and need to be stopped.

I was wrapped up in other projects and didn’t have time to investigate the origins of the torture photo included in the fake Stevens meme. When I asked for assistance, Rich Snyder, an old Cold War army buddy who is a computer science major and engineer, quickly went to work and within minutes, 4 minutes to be exact, located the origins of the photo.

From 2004, the link below explains that this was a torture training session conducted at an army facility in Argentina.

The article is in Spanish but can be translated via Google Translate. The translated text is below. 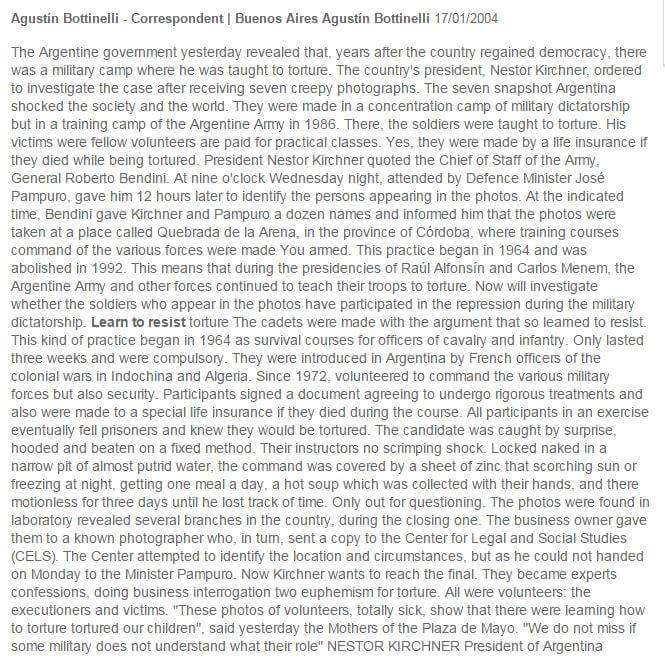