“We fear for our lives every day!”  “Every time we leave the house, we have to worry about getting killed by racist white cops!”  “Nothing but thugs with a badge!”  “No mother should have to worry about their child getting murdered by police on their way home from school.” 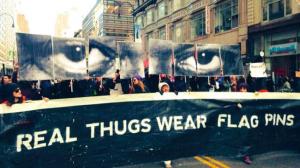 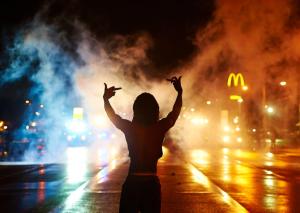 It is the most often heard social commentary of the year:  Young people live in fear of the police and have to fear for their lives every day.  Although it is easy to play this emotional game after several incidents of people dying at the hands of police, the actions of the people concerned do not bear proof of this belief.  Here are some photos. 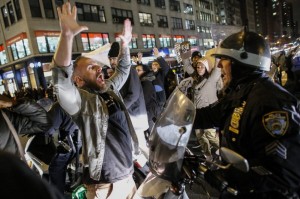 After observing weeks of protests and riots in Ferguson, Missouri, New York City, Los Angeles, San Francisco, and even Cleveland, I have seen a lot of things but fear has not been among them.  People who fear authority do not openly confront it.  People who fear police do not attempt to entice them to violence.  People who fear authority do not destroy property and attempt to murder others in the expression of that fear.  This is not a fight or flight situation.  They are not cornered and required by instinct to act in the interest of their survival.  Then, some of the violence would make sense, as if they had no other choice.  That is obviously not the case here because those people had no need to leave their house and place themselves in a confrontational status with authority.

People who fear authority avoid it.  They hide.  They reduce their exposure to it and they certainly avoid confronting it.  A simple look back through history answers this question.  It is how the Soviet Union and various other tyrannical regimes maintained order and the status quo among their populations. 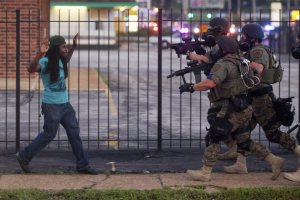 IF that narrative were true, wouldn’t there be less crime?  Wouldn’t our inner cities be relatively quiet.  Wouldn’t people stay indoors and avoid confrontation?  That certainly isn’t the case here in the U.S. of A.  We are a country of assholes who constantly want to poke authority and force authority to deal with our personal dysfunction.

IF that narrative were true, would young men be attacking police officers in their cruisers when told to get out of the middle of the street?  Would young men be robbing a convenience store, completely unafraid of the repercussions?  WOULD THEY STAND IN THE MIDDLE OF THE STREET, FACING OFF WITH A SQUAD OF ARMED MEN AND WOMEN WITH BADGES, AND LOB A FIREBOMB AT THEM?  Hell no, they wouldn’t.  Because the assumption would be that those armed officers would shoot you down in the street like a dog without a second thought.

People act these ways because they know the police, and authority in general, will NOT immediately confront the person with violence.  Hell, the perpetrator of the crime might even get special treatment because his lawyers and teachers can convince the system that they, “Have emotional issues that directed their conduct.”  Those people know that the chances of them being beaten or killed by police are virtually nonexistent and THAT is why they act the way they do.  It isn’t fear of authority.  It is an utter LACK of fear.

This morning, another young man of 18 was shot and killed by police in St. Louis, Missouri, not far from Ferguson.  I’m sure outrage and rioting is already proceeding as planned as a form of protest against the violence of the police state and its racist policies.  Someone will propose that the officers should have tazed him or tackled him to the ground, or maybe shot him in the leg.  They will say he didn’t have to die.  Well, they are right.  He didn’t have to die because he didn’t have to fight police and pull a gun on armed cops.  That was his choice and he died for it.

AND IF HE HAD ONE OUNCE OF FEAR OF AUTHORITY OR THE POLICE, HE WOULD NOT HAVE DONE SO.  He would not have committed whatever crime he committed that led to an interaction with police.  He would not have resisted the officers.  And he damn sure wouldn’t have tried to shoot it out with them.  He had no fear of them at all.  None.

I just want everyone to think about this the next time someone uses the “Fear Narrative” in their argument.  I am naming this the biggest lie of 2014, at least for this website.