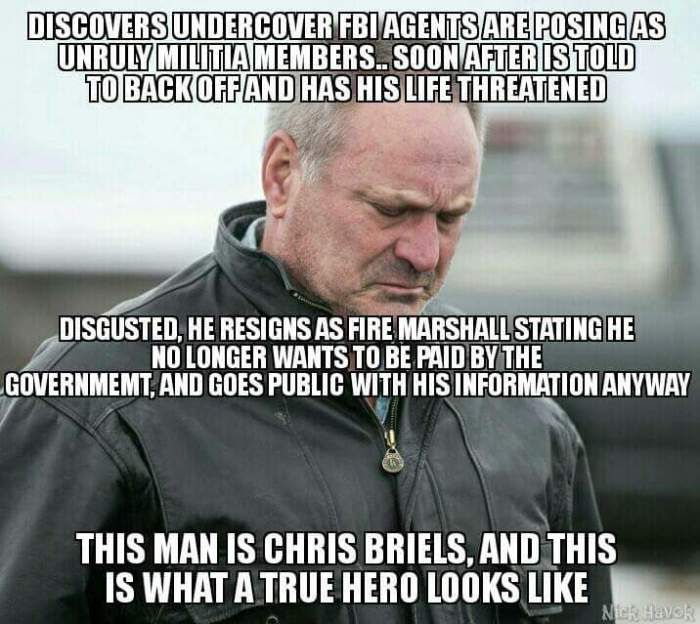 The above “Meme’d” photo has been floating around social media the last couple of days and is, yet again, a perfect example of people sharing false information without bothering to research its origins.  We will pick this particular case apart today and show you exactly how the hijacked Patriot Movement does its thing.

The man in the photo is Chris Briels.  He was the Fire Chief for Burns, Oregon, which is ground zero for the militia occupation of the Malheur Federal Wildlife Refuge, until his retirement in 2010.  The meme refers to him as a “Fire Marshall”- misspelled, of course.  Until Wednesday, he was acting as part-time county Fire Marshal for Harney County, Oregon.

The full text of the social media meme is as follows, misspellings included:

“DISCOVERS UNDERCOVER FBI AGENTS ARE POSING AS UNRULY MILITIA MEMBERS.. SOON AFTER IS TOLD TO BACK OFF AND HAS HIS LIFE THREATENED

DISGUSTED, HE RESIGNS AS FIRE MARSHALL STATING HE NO LONGER WANTS TO BE PAID BY THE GOVERNMENT, AND GOES PUBLIC WITH HIS INFORMATION ANYWAY

THIS MAN IS CHRIS BRIELS, AND THIS IS WHAT A TRUE HERO LOOKS LIKE”

You’ll recognize the name of the channel responsible for uploading the video.  Pete Santilli is a well-known liberty activist and internet program host.  Apparently, he is also a liar – Yet another Faketriot out to profit from the misery of others.  Below is the full description included with the uploaded video, minus the “visit our page” and “please send money” links:

As Pete Santilli has been reporting for weeks now; the FBI is known to covertly stage possible false flag scenarios and Santilli has therefore been openly calling for the Sheriff to ask the FBI to leave Harney County. Essentially, the FBI has a history of setting up fake terrorist attacks in order to justify utilizing lethal and overwhelming force to overpower their targets — in this instance, they are premeditating the murders via a “false-flag-terror” event of the Malheur Wildlife Refuge occupiers & their supporters. (The FBI may create a terror attack by one of their operatives, and then blame the militia. This will be a pretext to executing lethal resolution of the Constitutional Crisis on Burns, Oregon)

For many days now, we have seen the FBI covert deploy many resources upon the community such as human operatives, electronic surveillance & harassment, media propaganda and psychological warfare. It was not until today that a prominent community leader has presented indisputable testimony that FBI has been caught potentially staging a false flag event involving the local armory.

Former Fire Chief and Committee of Safety member gives a detailed account whereby he was informed that “militia were buzzing around the armory…” and he decided to investigate. As the Chief describers, when he ran the license plates of the subjects vehicles, it was confirmed that the suspicious subjects were undercover FBI.

Also, due to the Constitutional corruption of Judge Steven E. Grasty, Mr. Briles submitted his resignation to the Judge. 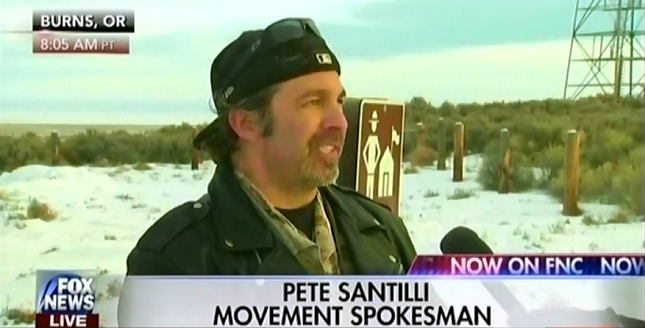 That’s Santilli above.  He cares so much about the truth that he didn’t even spell the former Chief’s name correctly.  Recently, he called a 15 year old girl a prostitute for speaking through tears at a community meeting about the militia occupation.  She and her classmates are fearful of what is going on.  For her honesty, Mister Santilli called her a prostitute.  You can read that story HERE.

Breaking the chain of lies

It is vitally important, if you truly want to witness the sheer manipulation and dishonesty of these faketriots, to read the meme, watch the video, and read Santilli’s description.  I want you to see it for yourself.  I know many of you trust me and will take me at my word but, if you truly want to understand it, you need to observe it for yourself.

At no time in the Briels’ press conference does he mention FBI agents posing as militia.  At no time does Briels accuse those FBI agents of attempting a provocation to touch off a confrontation.  At no times does Briels accuse those FBI agents of anything illegal.  Those descriptions come directly from faketriot spokesman, Pete Santilli in his “description” of the press conference, a conference he attended and filmed in order to post it online.  I guess he wasn’t paying attention to what was actually said so he just made the rest up.

Briels also clarified his statements to remove doubt about the faketriot commentary.  You can read that article HERE, where he clearly says the FBI agents were not posing as militia.

He does accuse them of lying to him.  I suppose undercover agents are supposed to drop their cover at the first question asked of them.  I guess Briels and the faketriots don’t understand the term, un·der·cov·er:

1. (of a person or their activities) involved in or involving secret work within a community or organization, especially for the purposes of police investigation or espionage.

Briels never says he doesn’t want to be paid by the government.  That would be rather stupid since he is currently drawing a government pension.  He says he can’t work for people he doesn’t trust.  He then offers his services to anyone looking for a fire safety professional.  The meme refers to him as a “Fire Marshall” while he refers to himself as.. well, nothing.  He says he “was” the Fire Chief.  Briels is not the Fire Chief for Burns, Oregon or for Harney County.  Chief Scott Williamson has been the Fire Chief for the Burns department since November of 2010.  See the public announcement HERE.  A separate article describes Briels as the retired Fire Chief who, until his resignation, had been acting as part-time county Fire Marshal.  Read that HERE.

For his part, Santilli went fully off the rails, accusing the FBI of planning “False Flag” terror attacks and premeditated murder.  I don’t know why Santilli is so popular, or why he has insinuated himself into the Liberty movement as a supposed spokesperson but, he is a huge part of the problem.

If you call yourself a patriot, but your patriotism is founded upon lies and propaganda, you aren’t a patriot at all.  You are a faketriot.  They have even tried to justify the lies (Yes, they generally are spreading lies intentionally and knowingly) by using the “Fair is fair” argument.  Their opposition lies so it is perfectly acceptable for the faketriots to do so.  The unfortunate aspect of the lie is that the faketriots are spreading lies TO THEIR OWN FOLLOWERS.  They aren’t spreading propaganda with the intention of influencing their detractors, no.  They are spreading lies in order to manipulate their own community.  It is despicable and pathetic.

One thought on “Faketriot Nation”