Only in America in the year 2016 can someone speak the truth and be misunderstood, misrepresented, and misappropriated. Well, as a distinguished misanthrope, allow me to clarify my position in hope that it will cease.

As you, and most of the free world, now know, I am the one, with the help of some talented friends, who debunked the Hillary Clinton / Chris Stevens torture/rape social media meme. As accomplished hippie hypocrite, Al Gore likes to say, “The science is settled.” The photos of “someone” being tortured with a cattle-prod are NOT photos of Ambassador Chris Stevens. They originated from an investigation into torture schools being operated in central and south America. The photos predate 2012 by nearly two decades. 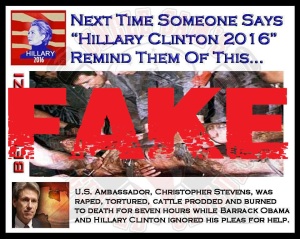 The end. That’s it. There is no more debate on that issue. It was proven beyond any doubt and any refutation. It isn’t Stevens. Get over it. The faketriot nation is in desperate need of leadership founded in actual patriotism, not lies and intentional propaganda.

Now, from that work, the debunking, those on the left of the political spectrum, AND the right, have extrapolated that I must be a Hillary supporter. The progressive, socialist hippies want to tag me in social media posts supporting their beloved matron, Hillary, and the faketriot “I ain’t educated but I seen it on Facebook” crowd want to assail me with insults and near death threats because they hate her so deeply.

Both of you groups of morons need to listen up. I was a Hillary hater before many of you were out of diapers. I think she is a despicable person who lacks even a simple shred of decency and sincerity. The only thing she cares about is power, and that is all she has ever cared for.

She was an embarrassment as a First Lady, a national security risk as Secretary of State, and has made her career upon a pile of lies and criminal behavior. Reset relations with Russia? Boy, did she ever. All the way back to 1967.

Both sides of this issue need a reality check. From now on, when either side, the filthy hippies or the faketriots, attempt to engage me in your nonsense, I’m just blocking them. I do this because neither side is utilizing the information I provided for an honest debate. The Faketriots want Hillary charged with murder, which is nonsense itself, and the progressives want to excuse Hillary’s incompetence based on the provenance of decades – old photos. You’re both wrong.

Just because I proved a far-right meme was a lie that does not mean I support the target of said meme. Give it a rest.

You have a long way to go before you catch up to me on the Hillary-hate train. Oh, and, I’ve often been told I shouldn’t be rude to people and use hurtful language when I correct these pathetic morons. For that, I do apologize. I’m sorry you are an idiot who cares little for the truth and only cares about your misguided political agenda.

Wake me when the real patriots are running the country again. It’s been a long, long time but I hear retro is in this year.